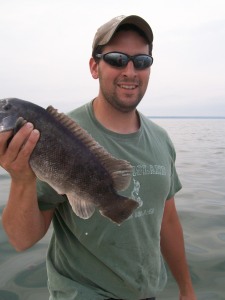 Today is Ed’s 29th birthday, so I’ve decided to do a post all about him!  Ed has followed in his dad’s footsteps as a stairbuilder.  Their business builds the stairways in the houses of some of the wealthiest people in Connecticut and New York.  They also built our staircases!  Here’s a shot of our “formal” stairway, with temporary ballusters.  Ed worked especially hard designing our black walnut railings, and is now working on designing a balluster that we both like and that goes with the traditional, American style of our house.

Besides making staircases, Ed is also skilled at making furniture in the early American style.  Here’s the coffee table that Ed gave me as a gift for our first Christmas in 2001.  We had only been dating for about a month, and it meant a lot to me that he would take the time to make such a beautiful piece of cherry furniture for me.

Ed built this cherry four-poster bed and gave it to me on Christmas Eve 2002, after we had been dating for a year.  The next day, on Christmas morning, Ed sat me on on the floor on a quilt that my great-grandmother made and had me open a silver Christmas ornament that contained a diamond ring.  He fooled me so well, since I thought he had already given me my gift!  On a side note, I gave Ed a welding helmet that year, and he still says it’s the best present that I ever gave to him. 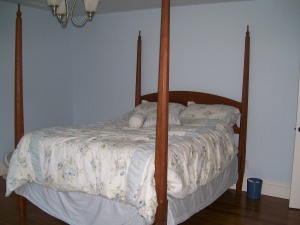 Here are our stairs from another angle, with a “Bird’s Eye” maple table that Ed built for me to set up my Christmas village on.  It’s a beautiful table.

Ed and I built three book cases like the one below, and painted one this blue color, and two are white.  The white ones hold my books in the office, while this blue one displays some photos in the family room.

Ed loves to build, and right now he’s working on building his workshop in the garage.  In addition to building, he likes to hunt and fish, enjoys the outdoors, likes spending time with his family, and has a love for trucks, tractors, boats, and all things mechanical.  Happy Birthday, Ed!

3 responses to “Meet my Husband”