What to make, what to make? It’s been a crazy week at work, finishing up grading final exams and starting fresh with new students.  If you’ve been following along on twitter or facebook, you know that Ed and I are sick.  I’ve been in denial, but Ed’s cold is somehow much, much worse than mine.  Neither of us is in any condition for a night out.  A quick look in the fridge and I realized I have a dozen and a half eggs, 3 half-gallons of milk (how did we get so much?), a block of cheese.  Quiche!

Ed likes meaty quiche, so I sent him into the basement to get some bacon from the freezer.  I, however, love a veggie quiche, but we’re slim on fresh veggies since I shop on the weekends.  I opened the freezer to pull out the pie shells (yes, I bought them… what do you want from me, I’m 34 weeks pregnant) and there it was! A bag of frozen creamed spinach, leftover from Christmas dinner.  I could certainly transform that into a creamy, delicous quiche.  Onions were already sauteed, spinach was already cooked and drained.  How easy!

Spread the creamed spinach in the bottom of the pie shell.  Beat the eggs and milk together, then pour over the spinach.  Sprinkle in the cheese, then top with some black pepper.  Bake at 375ºF for 35-40 minutes. 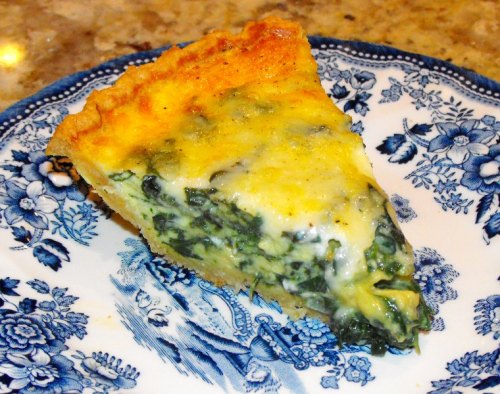 Filed under Food, Living from Scratch, Recipes, What's for Supper?