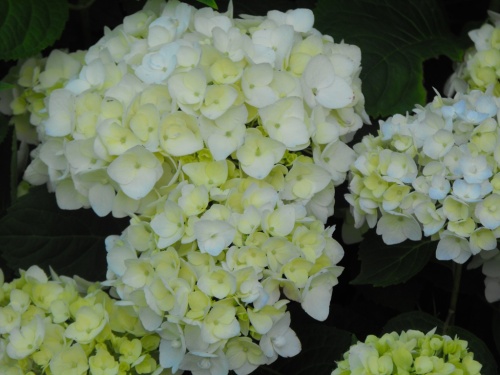 He’s the only one who is allowed to pick my hydrangeas!

Welcome to the May Carnival of Natural Parenting: Growing in the Outdoors

This post was written for inclusion in the monthly Carnival of Natural Parenting hosted by Code Name: Mama and Hobo Mama. This month our participants have shared how they encourage their children to connect with nature and dig in the dirt. Please read to the end to find a list of links to the other carnival participants.

I grew up on a farm that has been in my family for over 350 years and spent a big chunk of my childhood working in the farm market.  This means I have had the fortunate opportunity to enjoy amazing fruits and veggies at the peak of perfection.  My favorite was a warm strawberry picked and then transported a short distance, directly into my mouth.  My husband Ed’s family raises their own pigs, turkeys and chickens, and also operates a shellfishing business.

It is incredibly important to us that our son Joshua knows where his food comes from.  My philosophy of education is one of place-based, experiential learning, and this is exactly how we teach Joshua about his food.  We bring him along, visit our families, let him get dirty, eat the apples, and pet the piglets.  Farm kids are not isolated from the work that their parents do, and though we don’t live on a farm anymore we plan to keep Joshua involved with where his food comes from throughout his life.  Even a small child can help to raise his own food, and his responsibilities will grow along with him.

We started early.  About two weeks before Joshua was born, I joined my family for a walk around their 60-acre farm as they tapped trees in sugaring season.  This year, I brought an almost one-year-old Joshua along.  Next year, he’ll get to participate in some small way.

As Joshua grows up, he’ll learn to plant seeds, weed, fertilize and harvest.  He’ll be expected to work, learn, and play along with the adults.  He’ll learn to drive a tractor at a young age, when we think he’s ready.  He’ll grow pumpkins, berries and squash and climb up the dwarf tree to get a juicy peach.

He’ll help take care of animals and grow to love them like we do.  He’ll help to package meat, learn to cut it up, and maybe even learn to slaughter our meat animals, though I think we’ll let him make that choice for himself.  He’ll learn to fish in fresh and salt water, too.  We believe that if you choose to eat animals, you had better know where those animals came from and how they lived.

We also spend time in our own kitchen so that Joshua can learn to cook what he grows and raises.  Family meals are important to us, too, and he will get to help in an age-appropriate way.  Right now, Joshua plays with wooden spoons, measuring cups and pots while I cook.  Soon he’ll get to help stir, strain, and wash.  Maybe someday he’ll even cook a whole meal while I put my feet up. A girl can dream.

Visit Code Name: Mama and Hobo Mama to find out how you can participate in the next Carnival of Natural Parenting!

Please take time to read the submissions by the other carnival participants:

Tagged as carnival of natural parenting

Giveaway week of my Spring Celebration is finally here! Up first, Laura from Cubit’s Organics is offering her favorite seed collection, The Rainbow Collection!

Some details on the collection:

Sing along with me:

“Have you experienced the Rainbow Collection, the Gardeners, the Dreamers, and me?”

All Organic. All Open Pollinated. All so Rainbowy!
A hit with gardeners and children, and children gardeners.

4 separate packages of our seeds, handpacked in Toronto in 100% recycled paper packaging with full planting instructions.

To enter, leave a comment answering the following question: What’s your favorite veggie to grow from seed?

For extra entries (you must leave a separate comment here for each; 1 extra entry each):

This giveaway is open to residents of the US and Canada only. Entries close at midnight on March 30, and winners will be announced on March 31. Good luck!

Just in time for frost… My Heritage and Anne raspberries are finally producing!

What’s going strong in your garden?

Filed under Food, Gardening, Living from Scratch, Outside

I started this blog post like any other. I got my camera, and headed out to take some pictures, but I wanted these pictures to be unique. I decided to climb up to the top of the greenhouse, and take some shots of the garden from the peak window. The plan seemed simple enough, but I had this nagging fealing to be careful. I wrote it off figuring that no matter how far I fell off or out of the greenhouse it wouldn’t cause that serious of an injury.

I moved forward with care, and made it a point to hold on tight, with two hands when possible. This mindset seemed to ease my worry a bit. When I got to the top, and peared out, I made an interesting decision. I noted that I could fit completely out of the window, and decided to be a bit more daring than most days. So I pulled myself out of the window, and managed to stand up, with my feet at the base. I then grabbed hold of the ridge piece which caps the entire structure. I was quite proud of my climbing skills as I turned my camera on.

These would be some great shots ! I clicked off a photo of the difference between my 62 and 75 days corn, Early Sunglow and Butter and Suger respectively. I’ve grown corn in the garden before, but this corn was doing quite well. In my pride, I surveyed the rest of the garden, wondering how I would angle the pictures. That’s when I heard a noise, a buzzing it seemed. It was just my luck that a bee would find me in this vulnerable state. I swatted at the buzz, only to hear more noises. When I looked down to note the placement of my feet and options for evasion, I noticed the real problem, and began to feel what felt like dozens of painfull stings. There were wasps swarming all around my uncovered belly, arms and head. Here I am 15 feet above the ground, barely hanging onto the roof ridge wondering what to do, and thinking to myself “You don’t have time for a good idea, you just need to act fast”. I threw myself off of the structure, as I’ve jumped from many a tree as a child. I landed as I’ve learned to in the past, and hit the ground running. After clearing the grape trellis, I decided to check my self out and see how many holes I had in my skin. To my suprise, I could only find three wounds, albeit they carried a very sharp pain, and swelled to the size of a rolex before subsiding.

After dealing with the stings, I decided to take a photo of the creatures that defended their home, and chased me away. Here is a close up of one of these defensize creatures. I haven’t yet decided how to move forward with the knowledge of their existance. They may have helped pollinate the garden, so I’m torn with how to deal with a creature that has helped as well as hurt me. For now, I will leave them be.

ITFarmer is a self professed “computer guy”, working in the publishing industry for about ten years now.  In 2007, after reading repeatedly bad news about the economy, he decided it was time to learn how to grow food “Just In Case”.  Farming for survival was the intention, but it led to a new respect for nature, and became a much enjoyed hobby. These days The farmer spends little time reading about wall street, but a great deal of time spreading manure, and writing about his trial and error way of learning how to grow food.  Check out his blog!

It seems that everywhere I look, Mother Nature is reminding me that autumn is just around the corner.  Even in the muggy heat of early August, it’s clear that cooler weather is on its way.  The apples are turning red, the hydrangeas are fading from blue to brown, and the sunflowers are beginning to open. 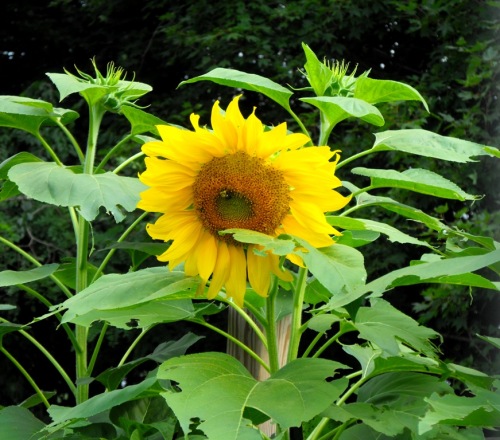 Filed under Gardening, Home, Outside