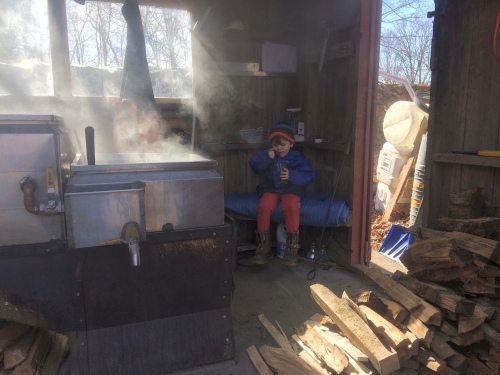 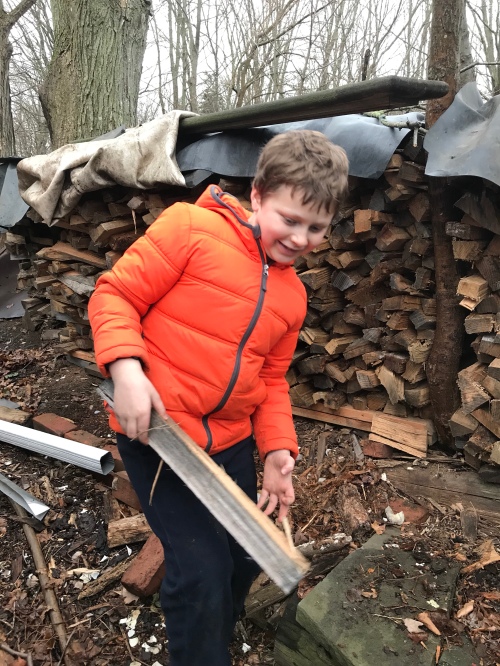 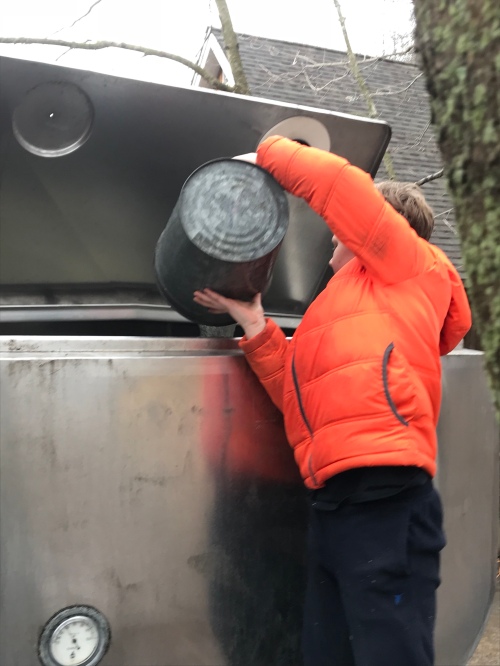 After taking a few years off from entering any of my pies in the local fair, I decided it was time to get back to it. I entered the State Two Crusted Apple Pie Contest, because I figured go big or go home! The rules stated that you could have other flavors added in as long as it was predominantly apple, so I decided to mix it up a bit so that my pie would stand out to the judges. I chose to develop a recipe using maple syrup and maple sugar because it’s a little bit different but still a traditional apple pie. I did a few trials, with feedback from my parents, brothers and sister in law (who are all apple connoisseurs) and my mother in law (who used to win all the baking contests and then became a judge at the fair). I also had my husband and picky kids as enthusiastic testers! I loved all the constructive criticism they gave me, because that made the pie so much better. My goals were to have a flaky, buttery crust that was golden brown and cooked well on the bottom, and tender, juicy (but not too juicy) flavorful apples. I pulled out all my tricks and got a delicious pie! 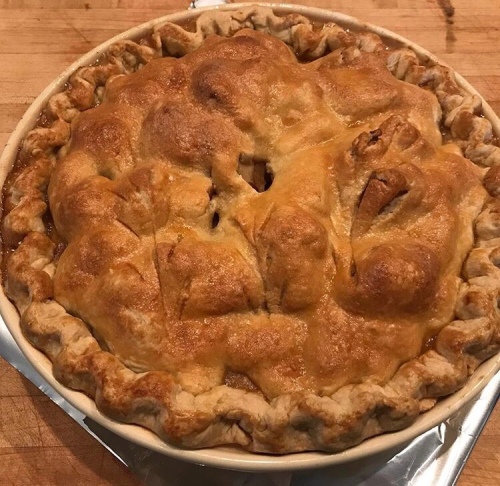 1. In a food processor, combine all ingredients except water and pulse until the butter is the size of small peas.

2. With the food processor running, pour in the water one tablespoon at a time until it forms into a ball.

3. Separate the dough in half, form into disks, wrap in plastic and place in the fridge while you prepare the filling.

Other ingredients for putting it all together

1. Preheat the oven to 350 degrees and remove the dough from the refrigerator.

2. Grease a 10″ pie pan with 1 Tbsp of the softened butter. This is one of my tricks to get a nicely browned bottom crust.

3. Combine all the filling ingredients in a big bowl.

4. Roll out the bottom crust and place it in the pan. Pile in the filling, leaving behind some of the juices that accumulate in the bowl so it’s not too runny. Pile it high! I like a lot of apples.

5. Dot the top of the apples with the remaining 2 Tbsp of softened butter.

6. Roll out the top crust and place it on top. Crimp the edges and cut a hole in the middle for a vent. In my family’s farm market, we carve designs into the tops of the pies so we can tell them apart. The apple design is three sheaves of wheat, and I find it’s impossible for me to make an apple pie without that design on top! That’s how I know it’s apple!

7. Brush on the egg wash and sprinkle on the maple sugar. Place on a sheet pan lined with foil or parchment to catch the drips, and place it in the middle of the oven.

8. Bake for an hour, then move the pie to the bottom rack for 10 minutes to finish cooking the bottom crust. Finally, move it to the top rack to nicely brown the top for about 10 minutes. It’s done when the filling bubbles out and the crust is golden brown.

9. Let the pie cool for at least an hour before slicing so it’s not too runny. Or go ahead and eat it if you can’t wait! Serve with a couple slices or sharp cheddar cheese, or vanilla ice cream on top. 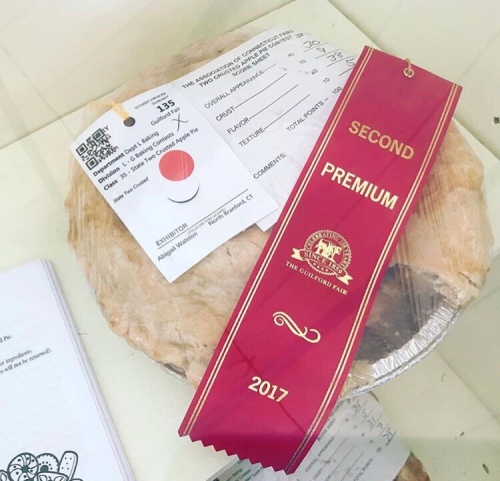 So after all that work, I got second place at my local fair. I was busy (I do have a job and three kids) and only baked one instead of doing a back up pie, and I got a huge crack in the crust! I lost points on the appearance, and ended up losing by one point! My pie scored highest for crust, flavor and texture though! Lesson learned, bake two and enter the prettier one. And eat the other! Next year I’m going to try again. The winner at the local fair goes on to compete at the state level. 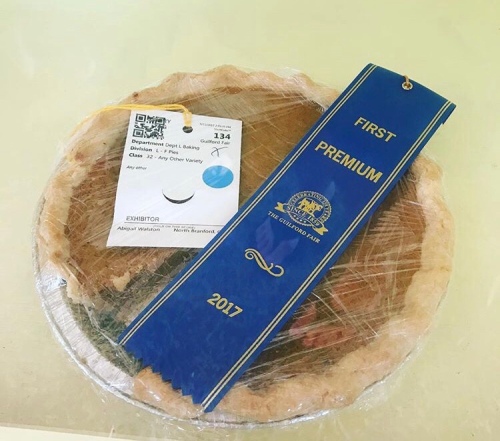 I also entered my old favorite, Butternut Squash Pie, and won a blue ribbon for it. That pie is always a winner! 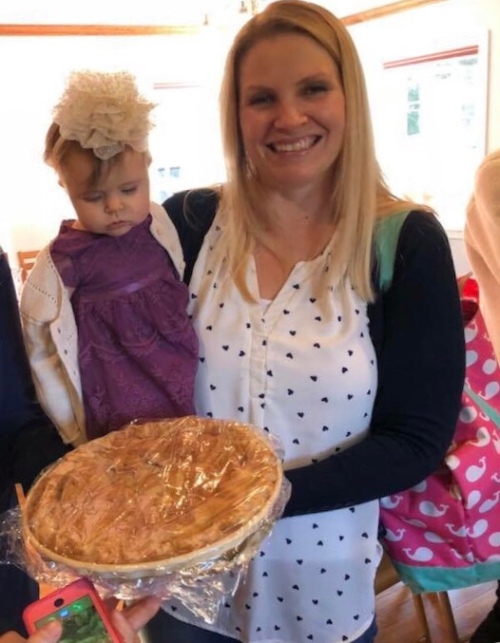 We brought the Yankee Maple Sugar Apple Pie to Thanksgiving this year and my family loved it. If you try the recipe, let me know how you like it!

After visiting my family tapping trees yesterday, I decided to continue the sugaring season theme and visit Ed’s family today while they boiled down sap.  It takes 40 gallons of sap to make 1 gallon of maple syrup, so you can imagine what a long process it is. 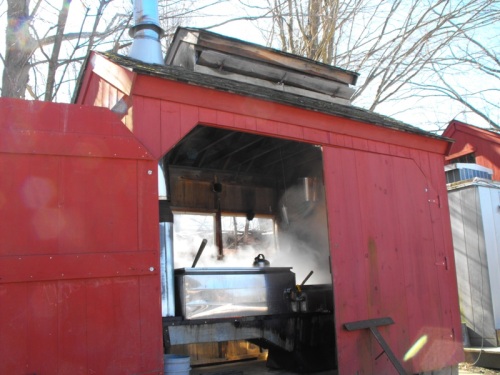 Ed’s dad stands over the evaporator, getting what I call a maple sap facial

As I said yesterday, dogs aren’t required, but who wouldn’t want to have the dogs present? Tucker and Jed made our time in the sugar house more fun.

A couple of people have expressed interest in seeing more about making maple syrup, so I headed on over to the farm today to visit everyone tapping trees.  I’m no expert, but I used to help when I was a kid and I understand the basic process.  If you would like to learn to make maple syrup, I suggest you speak to people in your area for more specifics. 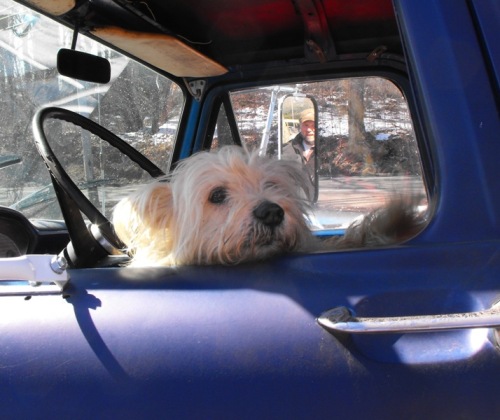 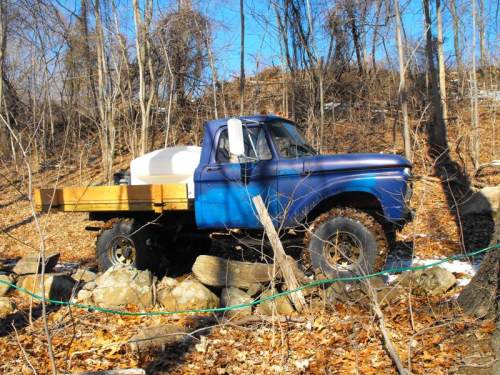 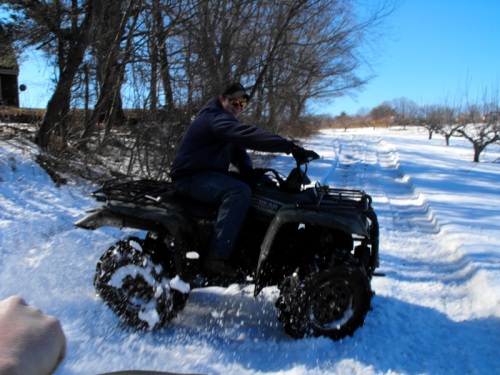 Nate on his quad cutting off me and Jon on the gator. See mom? I told you I had proof!

Step 2: Drill holes in the maple trees.  We used to use hand-drills when I was little, but now battery drills are much faster. 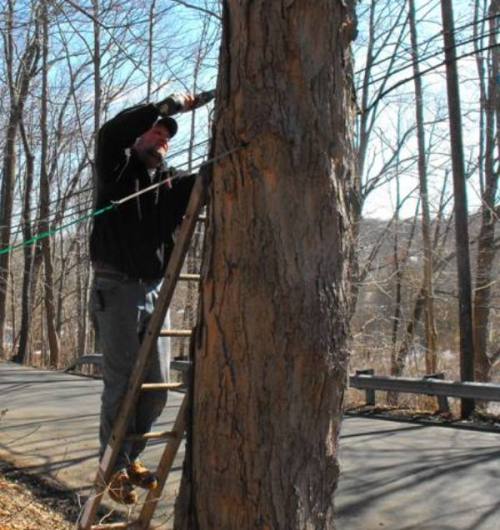 Um, Dad, I seem to remember that you’re not supposed to climb ladders due to your bad back!!! 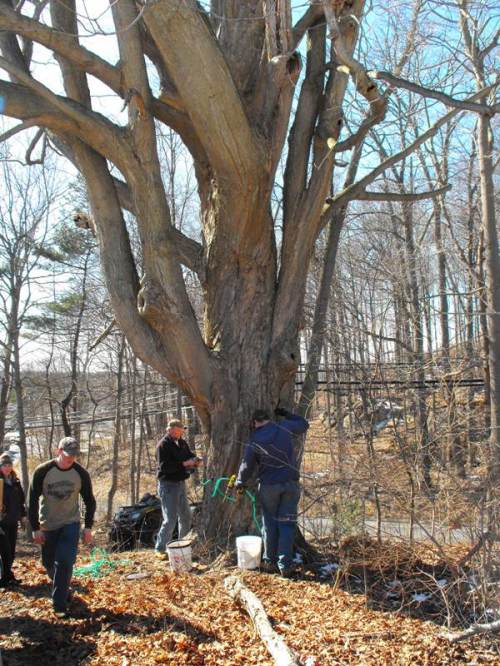 The bigger and older the tree, the more taps you can put on it.

Step 3: Hammer in the quill. A quill is like a little spout that allows the sap to pour out.

Step 4: Hang pails or attach tubing. We use both pails and tubing to collect the sap.  They each have their own advantages.

Pails have a nice old-fashioned look to them.  The disadvantage is that you have to collect sap from them every day to avoid overflow. 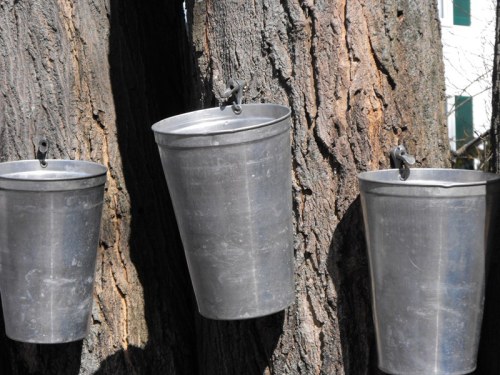 They also have covers, but I forgot to take pictures of them… 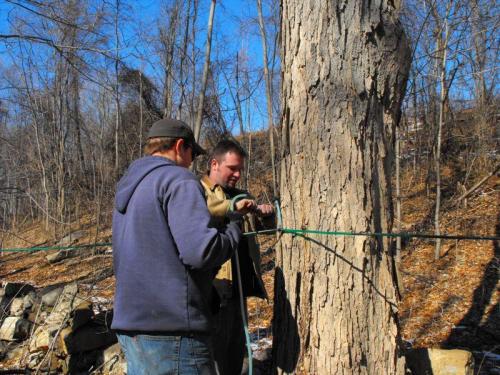 Tubing for sap lines is convenient because it runs from tree to tree and collects in a container.  The advantage is that you don’t have to collect sap every day, it runs right into the collection tank.  However, it just doesn’t have the same New England rustic appeal that the metal pails have.

After the trees are tapped, you hope for the perfect weather for the sap to run.  Temperatures need to be freezing at night, but above freezing during the day.  When you get enough sap, you can start boiling it down in the sugar house to make maple syrup.  It takes 40 gallons of sap to make 1 gallon of maple syrup.

It’s almost maple syrup season around here.  Many people think maple syrup is made in the fall, but it’s not.  Late winter and early spring, when the temperatures are above freezing during the day but still below freezing at night… that’s when the sap runs.  Last year’s syrup season wasn’t a great one, and that combined with an increased demand for local foods means that everyone I know who makes syrup, including my family, Ed’s family, members of my extended family, and other local farmers, are sold out.  Ed and I still have a few bottles of maple syrup squirreled away in our pantry. When I saw this recipe for maple-oatmeal scones, I was inspired to use some of our coveted syrup.  I made some adjustments to the recipe, accounting for the ingredients I had on hand and making additions as I saw fit.  I didn’t have any buttermilk, but substituted with 1/2 cup milk mixed with 1/2 Tbsp lemon juice, allowed to sit for 10 minutes.

Combine the flour, oats, baking powder, sugar, salt and cinnamon.  Cut in the butter with your fingers or a pastry blender.  In a separate bowl, mix the buttermilk, maple syrup and eggs, then add to the dry ingredients.  Stir until blended, then add the pecans.  Turn the dough out onto a floured counter, then form it into 4 equal circles, about 1 1/2″ thick.  Slice each circle into six triangles, then place on a parchment lined baking sheet.  Bake at 400°F for 18-20 minutes.  Allow to cool on a wire rack.

Whisk all ingredients together, then drizzle on top of the cooled scones.