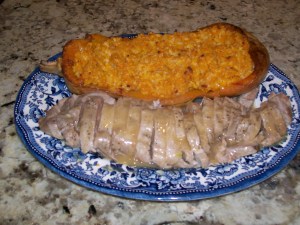 It’s no secret that I love to have apples with pork.  Every time I make pork chops, cutlets, or a roast, I always make fresh applesauce to go along with it, or I serve some of my home canned applesauce in a pinch.  But when I heard someone on TV making apple cider gravy, the wheels started to turn.

Apple cider is a part of my heritage.  Actually, it’s funny that growing up I didn’t like apple cider that much.  We’d have it all the time in the fall and I’d get sick of it.  The same was true of maple syrup: when we were making it in March, I didn’t like it.  Now, I really enjoy both cider and syrup, and when I have them, it reminds me of my childhood.  My brothers and I were very little when we started helping my dad make apple cider (and tap trees, too).  I remember how loud the machines were.  We’d take big bins of apples and were always proud to say there were no “drops” (apples that fell off the tree onto the ground) in our cider.  First, the apples would be pressed to remove the juice, then my dad would take the pumice (the skins, seeds, and other pulp leftover) and either dump it in the woods or give it to my uncle to feed his cows.  It was our job to help bottle the cider.  We’d put a clean, new bottle under the spout and fill it, then remove it, put the cap on, and put it in a big wooden bin.  By the end of the day, we were all sticky with cider, bees were everywhere, and we’d help to hose off all the bottles.  When they dried, my dad would drive the forklift down the hill to the farm market and we’d stock the shelves of the cooler with the fresh cider.  Back then, our cider was always unpasteurized.  However, about 10 years ago, there were a few scares when people got E. coli from unpasteurized cider, but not from our farm.  Since we didn’t use apples that fell on the ground, they weren’t exposed to the animal waste on the ground that carries E. coli.  None the less, our customers got scared of unpasteurized cider, and we bought a big machine to pasteurize it.  While pasteurized cider will keep longer, it just doesn’t taste the same to me and to many other folks who are used to the traditional raw cider.  Now, it’s been years since I helped make cider, but every time I drink it I think of noisy machines, being sticky, and bees.

Make tiny cuts all over the pork tenderloin and push the garlic slivers into them.  Rub the oil onto the tenderloin and then sprinkle with salt and pepper.  Bake at 400°F for 30 minutes or until cooked through.  Cover with foil and let rest for about 5 minutes before slicing.  Top with the apple cider gravy.

In a small saucepan, melt the butter and then mix in the flour.  Stir in the cider and chicken stock and simmer until thickened.  Season with salt and pepper to taste.

Split a butternut squash in half, scoop out the seeds and bake cut side down on a baking sheet for 1 hour at 350°F.  Scoop out the pulp, combine with bread crumbs, cheese, and season to taste.  Put the filling back in the shell and bake for 20 minutes until the filling is lightly browned. 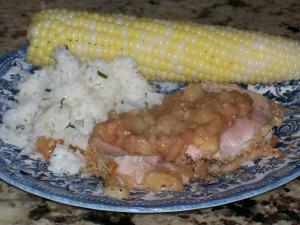 We’ve got the very earliest of apples ready at the stand.  They’re pretty sour, but they’re perfect for cooking!  I came up with this meal because I wanted to make some yummy unsweetened, chunky applesauce.

Sprinkle pork loin with salt and pepper all over.  With a sharp paring knife, cut tiny slices all over the pork, and stuff the garlic into them.  This will make the whole roast taste garlicky.  Spread the mustard onto the pork.  Mix bread crumbs and maple syrup in a bowl, then press onto the top and sides of the pork.  Bake in a 375 F oven for about 45 minutes to one hour, until the internal temperature reaches 155 F.  Let the roast rest for 10 minutes (the termperature will increase to 160 F while resting), covered, before serving.  Slice and serve with chunky applesauce.

I prefer unsweetened applesauce, but you can add some honey, maple syrup, brown sugar, or white sugar to taste.  Put apples in a pot.  Add a little bit of water, just enough to keep them from burning.  Sprinkle with cinnamon.  Cook over low heat for about 20 minutes until they’re soft and cooked through.  Serve warm or cold.